The field of vibration control considers the following fundamental principles:

These principles are explained below:

A good and straightforward example when discussing an elastically supported system is provided by the Single Degree of Freedom System (SDOF). An external force F(t) acts on the mass m that is connected to a spring with a stiffness k. The resulting motion of the mass is damped due to a damping device with a damping parameter d. 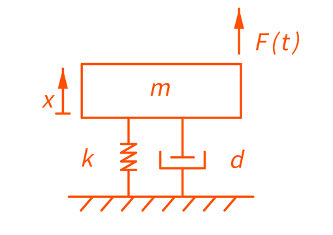 Starting from the equilibrium of the acting forces in the system

the differential equation describing the motion of the mass is given by:
mẍ + dẋ + kx = F(t)

In the case of no external excitation, but an initial displacement of the mass leading to an elastic force of the spring, the solution of the equation describes a free, undamped oscillation – the mass oscillates with its natural angular frequency ωo, i.e., its natural frequency fo=1/2π√(k/m).

In the case of a sinusoidal (harmonic) excitation force with a frequency f, the change in maximum displacement of the system (amplitude amplification) is given by:

Vibration transmissibility is defined by the ratio of transmitted forces divided by the exciting forces. Fig. 2 shows the transmissibility factor VT = (FB(t) /F(t)) over the tuning factor n. The tuning factor is defined as the ratio of the excitation frequency f divided by the natural frequency f0. It clearly shows that the attenuation of vibration transmission takes place only if the factor is beyond the value of

There is no reduction of dynamic forces possible when the natural frequency (= tuning frequency) of a single degree of freedom system (SDOF) is close to or above the relevant excitation frequencies. The dynamical amplification V being the ratio between transmitted and excited force equals:

In the case of base isolation, the tuning frequency of the elastically supported system has to be fo << f x 1/ √2 to avoid resonances with the excitation frequencies f. 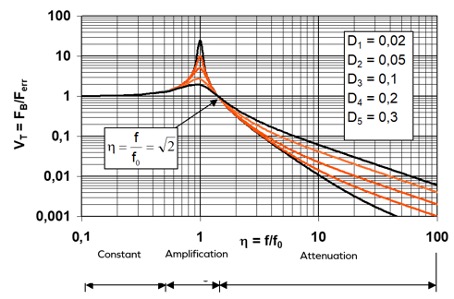 Fig 2: transmissibility curve depending on the damping

In the case of vibration control by damping, energy from an oscillating system is dissipated using a damping element. In contrast to isolation, here, the system is excited first i.e. there is an energy transfer from the exciter to the vibratory system. Within the damping element, a portion of the kinetic energy of the vibration is converted into another form of energy like heat, thus reducing the amplitude of the oscillation. Damping is only an effective method to reduce vibrations in the range of the system’s natural frequency i.e. around resonance (Fig. 3). By increasing the damping parameter, the amplitude of the system in that area can be significantly reduced. 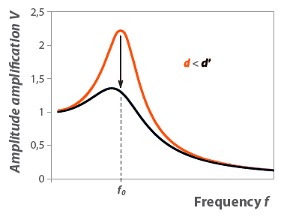 The basic characteristics of a vibratory system are defined by the oscillating mass, the damping as well as the elastic properties of the system. In case of an excitation around the natural frequency of the system, 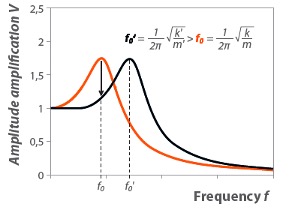 A standard method of introducing damping or balancing forces is the application of a Tuned Mass Damper (TMD). Excitation forces are compensated by mass forces so that parts of the structure (main construction) remain almost at rest in a specific frequency range. In vibration damping, an additional oscillator consisting of mass and stiffness (undamped absorber) or of mass, stiffness, and damping (damped absorber) is attached to the main structure for calming.

The undamped absorber is usually used for stationary harmonic oscillation problems, where the absorber natural frequency fT is tuned to the excitation frequency. Theoretically, the vibration amplitudes of the main system can be reduced to zero if no damping is present. 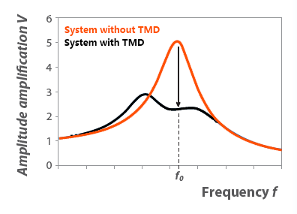